Technology and Parenting
December 17, 2020 by ContributorT
0

Social media anxiety and FOMO is not to be underrated as it has an effect on society, especially the younger generation.

At our 7th Annual Parenting Conference, we discussed FOMO and social media; we had this discussion with Mr. Patrick McGinnis, the author of the book ‘Fear of Missing Out: Practical Decision-Making in a World of Overwhelming Choice’; he is also the host of the hit podcast, FOMO Sapiens, which is distributed by Harvard Business Review. Read also Highlights from the 7th Annual Parenting Conference 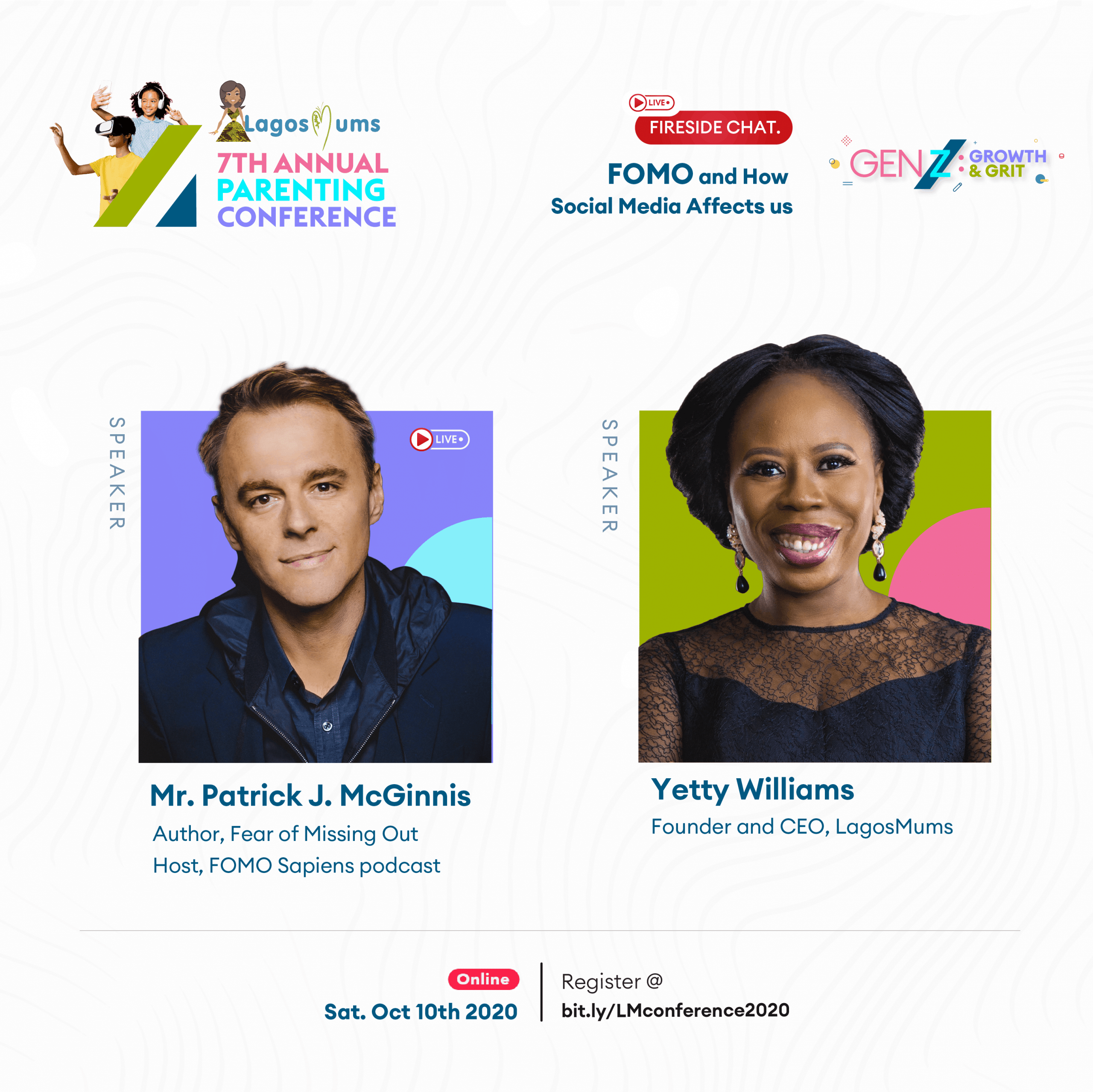 Mr McGinnis coined the term FOMO, which in full means Fear Of Missing Out; and described it as anxiety, produced by the feeling that there’s something better out there than what we’re doing right now; combined with the fear of being excluded from a beneficial reflective experience.

He sighted an example of what FOMO is all about, where someone sitting at home, especially now, during this particular period of COVID; sometimes you feel that, and you see people out there doing things, living lives that look better than yours.

The reality is that you have no idea what they’re talking about is better than what you’re experiencing but that feeling that somehow, you are missing out on these beneficial memorable experiences is very much impacted by what we see online and on social media.

He stated that FOMO is based on perception, but perception can be a deception; one very important thing to do is to think critically about whether or not it corresponds to reality. So that’s a big part of what we need to do as digital citizens and consumers to make sure that we don’t feel these bad feelings because they cause stress, unhappiness, and feelings of failure, that are completely unnecessary.

Effects of COVID-19 on FOMO and Social Media use

Mr. McGinnis stated that it is difficult dealing with FOMO; also stating that it has become extremely difficult when COVID-19 hit.

A lot of people thought FOMO is going to go because there’s nothing to miss out on, but what drives FOMO and is sort of like an accelerant is social media. And when we went into quarantine this year, the one thing we took with us, was our phone. We had our phones, more than ever, and we spent more time online than we had in the past. And so as a result, it was quite damaging, and at the same time, a lot of people spend much more time on social media.

There has been a lot of clinical psychology that shows that people who post and spend more time on social media are more depressed. It is a negative cycle where you feel bad, go on social media, post to make yourself feel better, you feel worse, and so it creates a sort of pathology that’s very unhealthy for people; and of course, young people are more susceptible because they live most of their lives online; such as relationships that are conducted via digital platforms.

When you spend a lot of time online consuming things that are completely made up, even though they look real, the more you spend time in a false reality. It is completely disconnected from your true reality. And that’s where the problem starts; it is that you become so disconnected from what’s actually in your life that you can feel, and you’re almost like living in a fictional world around you where everything is better than what you’re living and you feel more and more inactive.

What to do about FOMO?

He stated that the first thing parents need to do is teach their children to identify the difference between reality and fiction on social media. This is exposing them to the fact that how people are manipulating information and helping them to think critically, questioning what they see. And there’s a lot of ways to do that; like kinds of social media figures online that will post the airbrushed version and then the real version to expose a thing.

Also, just spending time with them online and helping them to ask questions like does that seem real to you? Do you think that says what it is been portrayed? These are helpful because what you can show them is that social media a lot of times is marketing that’s trying to get them to spend money and do things. The second thing you can do is, help young people realize that it’s kind of like eating; social media is like nutrition. You’re not going to never eat in fear of getting fat, but you need to have a healthy diet, just as you do when you eat.

You don’t want to eat cookies all day long, you have cookies once a day. And so think about how you consume social media as a healthy balanced diet and then having the appropriate sense of what is a good amount to have versus a bad amount to have. That’s important because controlling your life online isn’t about accidents. It’s about appropriate control.

Concept of Immunity to FOMO

We asked Mr McGinnis if it was possible to be immune to the effects of FOMO. He answered ‘No’; giving the reason that FOMO is part of our DNA, back to the earliest humans, 2 million years ago.

Now, we have evolved, but those feelings are still deep inside of us, and that’s just part of the human experience; the difference is technology, connectivity, and social media. That’s why we even have the word FOMO; if we didn’t have those things, FOMO would not have become a mass problem that more than 50% of people across the world feel.

And so, that’s just the way it is. It is important to accept that and then that’s how I’m hardwired; and then asking the question, What can I do to make sure that I’m conscious and mindful about that? and then be able to function appropriately.

How to ensure Grit in Gen Z

Mr. McGinnis shared some books on positive psychology, especially in the context of Gen Z, such as ‘Grit’ by Angela Duckworth and ‘The Happiness Advantage’ by Shawn Achor. He stated that GenZ has many great qualities; they’re empathetic, open-minded, flexible, and supportive of other people and different people. But there is a stereotype when it comes to sticking with it when things are hard.

It comes down to the way parents raise their children; some parents are so protective of their children; they don’t want them to feel failure or hurt. And so, and they have the financial wherewithal of it and other kinds of wherewithal to help them avoid those feelings, so they shelter them so much that eventually when these children, go to college or go to work and have those failures, the parents intervene; they call the university or employer.

So what do we do to avoid that label as parents are being very straightforward about sticking with it? You have to create very specific boundaries about behaviour, and then follow through on what you’ve told them you will do.

Also, teaching children to embrace failure as an opportunity to grow and come out ahead is important; and so, resilience is about recognizing that every time you fail is an opportunity to come out stronger. Teaching children that mindset and letting them fail, cry, and feel bad, might not look good at the moment; but has incredible long term value.

Mr. McGinnis stated that FOMO is that we are curious about something that we want to learn more about, that there’s something we might want to do; if we see somebody doing something and we feel the FOMO maybe it’s because we do want to do that thing. We just have to think about it thoughtfully, we have to explore whether perception is deception or not. And then potentially do that thing and so he thinks it’s a great way to uncover interests or things that we want to do that maybe we haven’t explored. Then, the important thing is to determine you want to check something out; but don’t just jump in full time; try it out first, have a little bit of experience of that thing, and then see if your perception corresponds to reality, or not.

Mr. McGinnis also talked on FOBO, which means ‘Fear Of a Better Option’; he stated that it is what happens when we have a decision we need to make, and there are perfectly acceptable options in front of us, but we are unwilling to choose just one in hopes that maybe there’s a better option out there that we haven’t seen yet. It is the situation in which you would rather not decide, and wait, then make a decision, even though you can make a decision right now, and it’s very paralyzing. It also leads to a lot of stress and again like FOMO it’s based on perception; you have no idea if anything better will come along but maybe you think that maybe there could be. And so therefore you delay and it’s bad for you because you don’t make decisions, but it’s bad for everybody around you who’s just waiting for you to decide so they can move on with their life as well.

How to Overcome FOMO

He stated that FOMO is about perception, and it’s about a fear of being left out from the crowd. Those are the things that we need to combat, and here’s how we can: